A cooperation game to overcoming the crisis 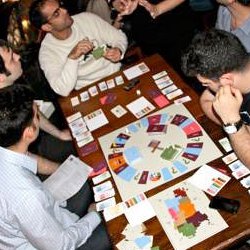 An innovative board game, “WeCoop – win cooperation “, has been developed with the main goal of fostering cooperation to promote this economic model, which is more humane and sustainable. It has been developed by a team of young people of the Consortium “Solidarietà” (“Solidarity”) from Cagliari (Italy), supported by Confcooperative, in collaboration with the Department of Economics and Business of the University of Cagliari and of the European Institute of Design (IED). Economists, mathematicians, educators and designers have conceived the idea, designed it and produced the game, with the support also of Artevideo, a cooperative in the field of communications.

The model is similar to the “Monopoly” game, but in a cooperative way! The objective is not to beat opponents, but rather to cooperate in the community, contributing to the growth of the territory. The player will come across a series of opportunities, dilemmas, and unexpected situations, just like in a real cooperative. This is not just a game, it is also a learning product! In fact, the other important aspect of this initiative is related to the education of children.

The first workshop of “Wecoop” has been held recently with fifty students from the University of Cagliari. They could simulate the business activity and implement the principles of innovation, competition and cooperation. The impressions were enthusiastic concerning the originality of the game itself, both for cultural and educational purposes. After the success achieved by the regional first version of the game, they are also designing, national and international versions in collaboration with the network of cooperative credit banks.

A very similar game was launched in America by the worker cooperative TESA (Toolbox for Education and Social Action), named “Co-opoly where players collaborate to found and run a democratic business. In order to survive as individuals and to strive for the success of their cooperative, players make tough choices regarding big and small challenges while putting their teamwork abilities to the test. It is a game of skill and solidarity, where everyone wins or everybody loses.

Beyond the differences, both “WeCoop” and “Co-opoly”, have the same aims: not only to refresh the cooperative model, but first of all to be proactive, tackling the crisis with courage, being aware of the importance of teamwork and reciprocity, as pillars of the cooperative model.